Ragdoll, prima facie is yet another British thriller about cops hunting a serial killer. You know the drill: Cops are dead serious but flawed when the killer taunts them until they finally find him. It’s what you’d expect from a BBC or ITV crime show. What’s unexpected is the sarcastic dark humor and wise cops that elevate the show into something hugely entertaining. Perhaps it’s because this show is produced by AMC and British crime cable network Alibi that they could do something a little different to set themselves apart from the usual propaganda that the BBC and ITV broadcast.

Harry Lloyd Hughes plays DCI Nathan Rose, the archetypal maverick cop, fresh out of the mental institution still suffering from PTSD after beating a serial killer in court and his ethical violations set the suspect free. He joins a new case where the body is sewn from several different bodies, so the killer is referred to as “Ragdoll” after a tug of war between the cops to give him a nickname. In case you were wondering, the IT guy won. He and his partner DI Baxter (Thalissa Teixeira) receive former LAPD transplant-turned-London Metropolitan rookie Constable Edmunds (Lucy Hale). Rose and Baxter slip into sneaky cop parent mode at Edmunds as their surrogate daughter with her own brand of deadpan American jokes. Rose also turns out to have ties to the Ragdoll Killer who names him as the final name on a list of intended victims.

The show moves at a faster, smoother pace with an attention-grabbing nastiness that doesn’t dwell on the seriousness in which a BBC or ITV show likes to wallow. The real attraction here is the dark humor and banter that the lead trio engage in, and Lucy Hale gives a different and more layered performance than her other roles. Here, she plays an American fish out of water who holds her ground with her more jaded British mentors with unexpected comedic timing. The world is transformed into a hyperrealistic fantasy with outlandish violence and elaborate schemes by the serial killer. You have an idea of ​​the type of tone the show is going for when presented Phil Davis playing the mayor of London as a skeezier, Cockney’s version of Boris Johnson when he was mayor. The serial killer is an urban legend that turns out to be real, which Rose finds out a bit too late while taking medicine from the goofy trash can.

In short, this show is NUTS entertaining! Considering how crime shows about serial killers are a dime a dozen on UK TV these days and always treated with the solemnity of someone declaring they have cancer, rag doll knows it’s ridiculous and treats it seriously enough not to become an outright parody to be more fun than darker shows. rag doll airs in the United States on AMC+ but it might be buried under the sheer volume of channels and streaming content, so be sure to seek it out. 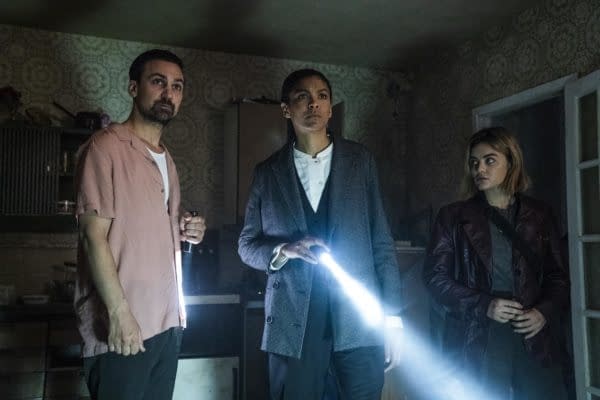 Ragdoll is a detective thriller about the hunt for a serial killer that’s sarcastic and funny with cunning cops and a wildly over-the-top madness that gives the plot the respect it deserves. This show knows that’s ridiculous and plays it all out with a likable cast of slightly offbeat cop heroes.

AMC+ has released the first look at its upcoming “Ragdoll” thriller series, but fair warning: this isn’t for the faint-hearted. The six-part AMC+ original series follows a team of British detectives tracking down a serial killer who murders, dismembers and then sews the body parts of various victims into one grotesque body. Henry Lloyd-Hughes plays […]

The original AMC+ series, rag doll is ready to receive linear output on AMC. The acclaimed serial killer thriller will premiere on the network beginning at 10 p.m. ET/PT on Monday, February 28, 2022. The six-episode series will air new episodes weekly on AMC after the network airs the award-winning series Kill Evewhich was produced […]

If you’re anything like us, you’ll go wild for a new crime thriller, and the darker and twistier it is, the better. Sound like you? Then rag doll will be right up your street, starring Lucy Hale and based on a bestselling novel of the same name. After the first episode aired, reviews were mixed […]